The Road Ahead for Biden’s Infrastructure Agenda

To read the full article, see the Investment Strategy Quarterly publication linked below.

After more than a year of pandemic-related market uncertainty, attention is turning to the recovery stage of U.S. policymaking and the more than $4 trillion in infrastructure and social program spending outlined by the Biden administration earlier this year. While negotiations are highly in flux and divergent outcomes cannot be fully ruled out, current indications are that an infrastructure package in the $2 trillion to $3 trillion range, with about $1 trillion in deficit spending, is likely by the end of this year or early next year.

Broadly, we expect a final package to cover three main pillars: traditional infrastructure (such as roads, bridges, and highways); investment in U.S. domestic manufacturing through clean energy and next-generation technology supply chains; and investment into social infrastructure via an extension of the recently-enacted Child Tax Credit expansion and increased funding for education. Along these lines, we expect Congress to take select portions of the American Jobs Plan (AJP) and American Families Plan (AFP) and pair them with associated tax adjustments to raise revenue, tilted more toward corporate tax changes.

The question remains, where do we go from here? The path forward will be guided by political decisions, particularly on the size of the package (large, single bill, or separate attempts) and whether it advances with bipartisan support or by a Democratic-only reconciliation push requiring only a simple majority in the Senate. These factors will influence the final provisions of the infrastructure package, and should be monitored as legislation is crafted into the fall. 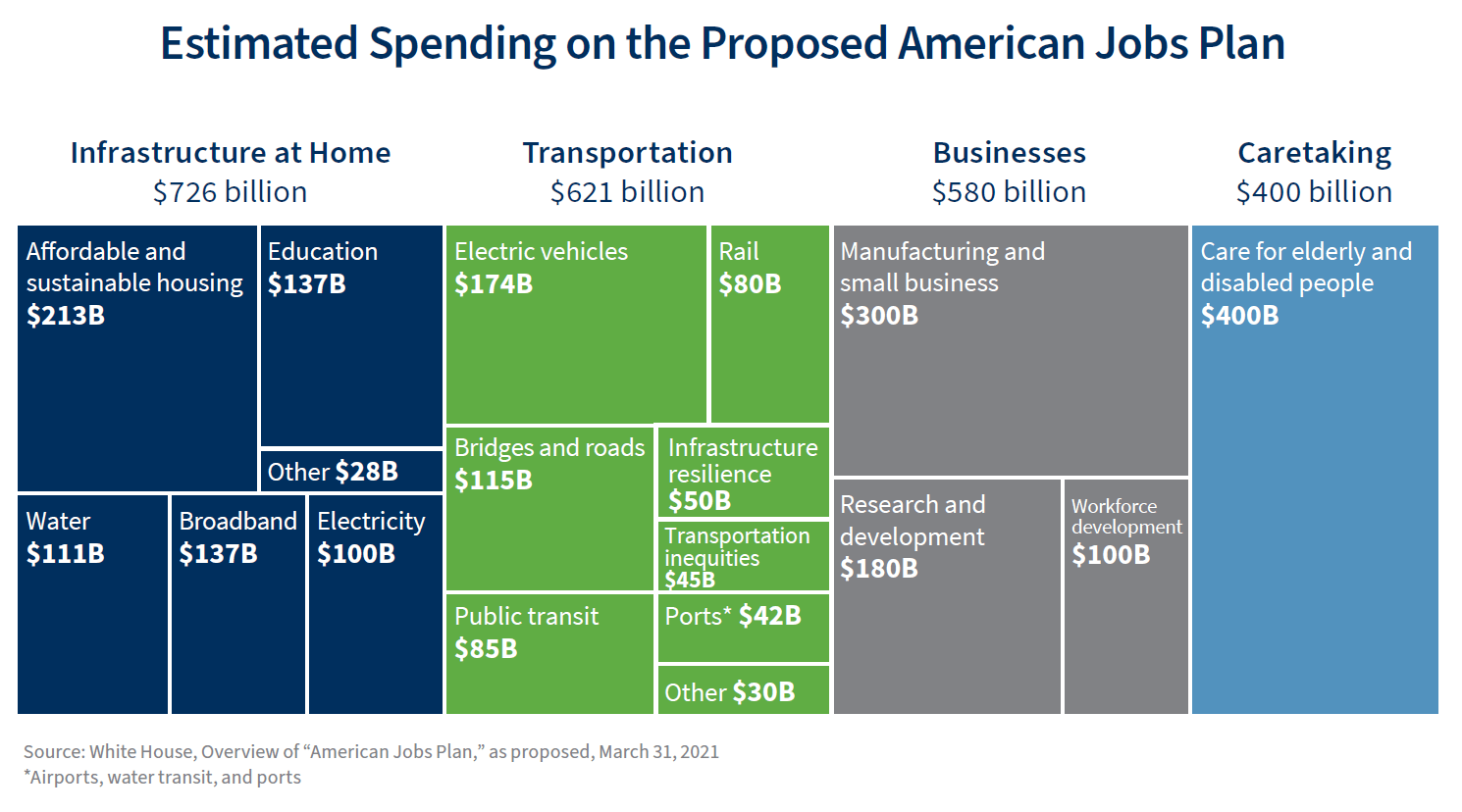 Expect proposed tax changes to be dialed back

Much attention has focused on the proposed tax changes as revenue sources for Biden’s infrastructure priorities, which we broadly view as some of the most fluid aspects of ongoing negotiations. The ultimate corporate tax rate, adjustments to personal taxes for wealthy taxpayers, and the fate of state and local tax (SALT) adjustments continue to be the top issues of the tax debate in Washington.

As we have previously highlighted, the revenue source with the most political support in Biden’s infrastructure agenda is a higher corporate tax rate, but at a lower rate than the proposed 28%, likely in the 24-25% range.

Moderate Democrats are reportedly uneasy with the political consequences of raising the capital gains rate to the proposed ordinary income rate of 39.6% for incomes above $1 million with SALT caps in place, raising the chances that the capital gains rate change, if included, also trends lower. The balance is between three items on capital gains – the rate, step-up in basis, and implementation date. If compromise is found on the rate and step-up exclusion, the effective date could come earlier, as currently proposed by the Biden administration (retroactive to its announcement in April 2021).

We expect continued emphasis on popular support for these corporate and individual tax changes by the Biden administration, but the current political dynamics highlight the difficulty of finding agreement among Democrats with very limited room to maneuver given the slim margins in both chambers of Congress.

We will specifically be watching dynamics among Democratic House lawmakers as the capital gains tax would be an even bigger hit to high-tax states with their own state-level capital gains charges, such as New York and California. Lawmakers from these states, especially in swing districts, are likely to see political blowback from their constituents. However, many are also concerned about primary challengers from the left. As such, support for a capital gains rate hike with some moderating adjustments to the current proposal would likely be the preferred policy path forward for these members. As it currently stands, Speaker Pelosi can only lose two votes to advance legislation, giving these lawmakers significant leverage to influence the tax debate.


Investment Strategy Quarterly is intended to communicate current economic and capital market information along with the informed perspectives of our investment professionals. You may contact your financial advisor to discuss the content of this publication in the context of your own unique circumstances. Published 7/1/2021.