The Evolution of Money from IOU Tokens to Digital Currency

Raymond James Chief Economist Scott Brown breaks down the three functions of money and discusses how currencies have transformed over time.

To read the full article, see the Investment Strategy Quarterly publication linked below.

Money is the lifeblood of the economy, a key factor in the historical development of society. It has changed a lot over time, and technology will continue to drive further changes, offering benefits as well as potential risks.

Economists note three functions of money: it is a medium of exchange, a store of value, and a unit of account. Money is liquid so it can easily be used to purchase goods and services. Inflation reduces its purchasing power over time, but otherwise, money can be saved and spent later. Money serves as a yardstick to measure accounts, costs and prices.

Prior to the development of money, people had to barter, exchanging one type of good for another. An easier way was needed to keep track of who owed what to whom, and so systems of ledgers were developed. In some places these IOUs were in tokens, such as shells, beads, or whale teeth, which could be exchanged, serving as an early type of money (as well as credit). These early forms suffered from a lack of central control or enforcement.

As civilization developed, metals such as bronze, copper, or tin, would be exchanged, with the idea that they had an end use (they could be made into cooking utensils or weapons, for example). Authorities began to issue coins, and the value would be based on the metal used. This helped to improve commerce, but the value depended on the scarcity of the type of metal used. Gold and silver coins became more common.

When Marco Polo returned from the East, he reported that the Chinese were using paper money. At the time, this sounded like a crazy idea, but eventually it caught on. Initially, the paper money was backed by a physical commodity such as gold or silver, the value of which changes depending on supply and demand. When gold and silver began arriving from the New World, inflation in Europe increased.

The U.S. and other countries left the gold standard (the backing of paper money by a reserve of gold) in 1973, and we now have what’s called fiat money. That is, there is no inherent value in the dollar; its worth is determined by a shared concept of what it can buy. The dollar is legal tender, meaning that courts of law recognize it as a satisfactory payment of monetary debt.

Fractional banking and the creation of money

These days, the concept of money includes much more than hard currency. In fact, paper currency and coins account for a tiny fraction of transactions.

There are a number of money supply measures, each reflecting degrees of liquidity. The monetary base includes currency in circulation and reserves of banks and other depository institutions held at the Federal Reserve. M1 includes currency held by the public and checking accounts. M2 equals M1 plus savings deposits, small-denomination time deposits (less than $100,000), and retail money market fund shares.

The Federal Reserve (Fed) creates money through open market operations, buying Treasury securities from commercial banks using money it creates out of thin air. The Fed receives the securities from the commercial bank and issues them bank reserves. These reserves are then multiplied through the fractional reserve banking system*.

Banks are required to hold a certain percentage of deposits in reserve. The rest can be lent out, adding to the money supply. By making loans (in excess of required reserves), the money supply is expanded. The Federal Open Market Committee, which includes the members of the Fed’s Board of Governors and five of the twelve Fed district banks, raises or lowers short-term interest rates to adjust bank reserves.

The relationships between the monetary aggregates (M1, M2, etc.) and growth and inflation broke down by the early 1990s. The Fed still keeps track of the money supply measures, but doesn’t place much weight on them in setting monetary policy. 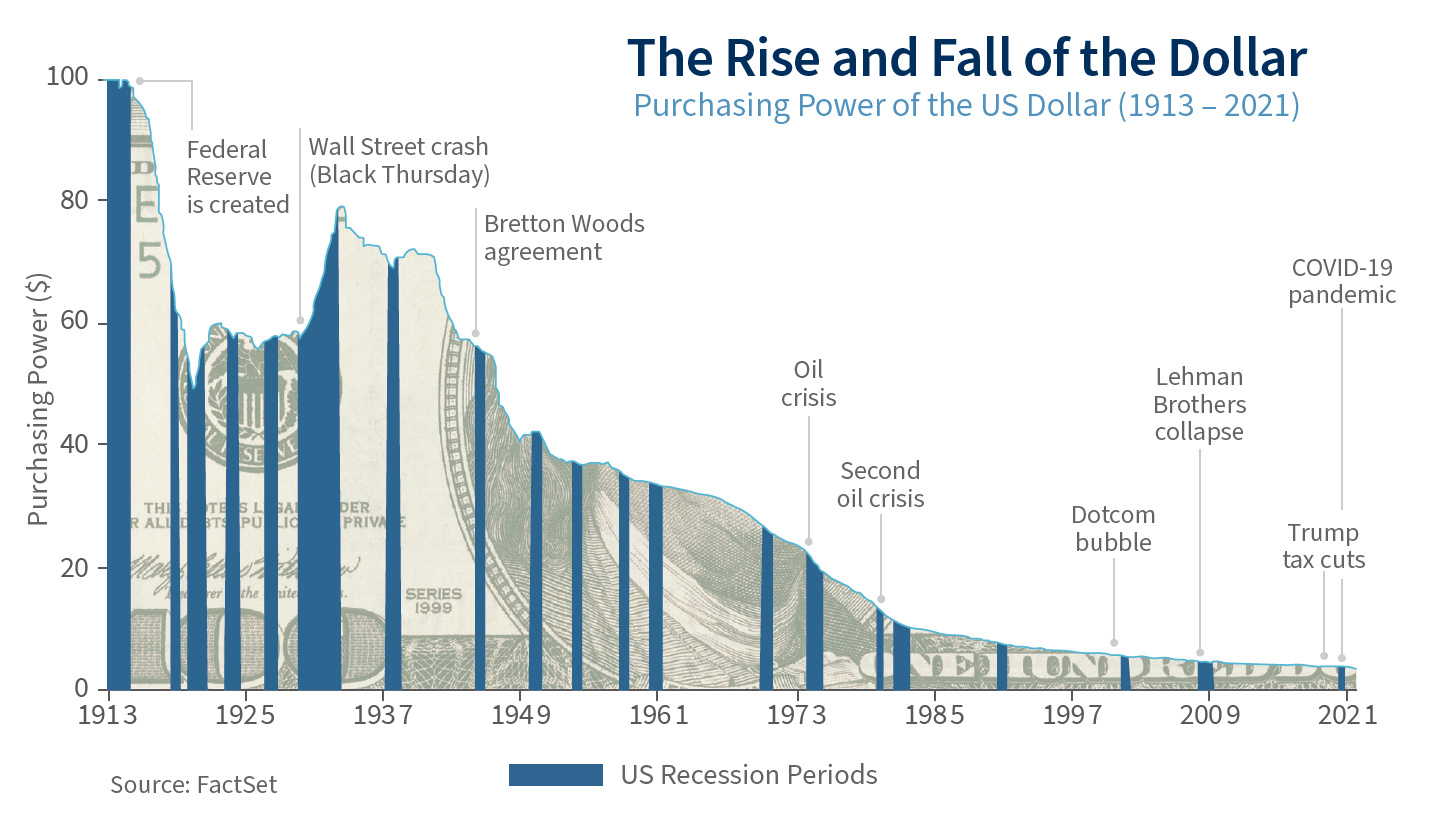 Cryptocurrencies, such as Bitcoin, Ethereum, and Dogecoin, are digital assets, using distributed ledger technologies, such as blockchain, to secure transaction records and verify transfers. They are an elegant solution to no particular problem with conventional money.

The use of cryptocurrencies as a medium of exchange is limited. They can be used to buy a small number of goods and services and transaction fees tend to be high. They may store value, but as we’ve seen, that value can change dramatically from day to day. To date, cryptocurrencies have not served as a convenient way to make payments.

Critics have likened cryptocurrencies to a pyramid scheme and point to a number of negatives. They are used widely in money laundering, the illegal drug trade, and other criminal activities (but then again, so is paper currency). A lot of energy is used in mining new cryptocurrency, adding to concerns about climate change.

Digital currencies, including cryptocurrencies, are money in electronic form. Central Bank Digital Currencies (CBDC) are (or will be) issued by a central bank. China has a digital Renminbi, but most other central banks are still studying CBDCs. As part of the money supply, CBDCs will still be a fiat currency, but will offer security in transactions and transfers.

Some cryptocurrencies, called stablecoins, are tied to a hard currency (such as the dollar). Stablecoins improve payment efficiency, speed up settlement flows, and reduce user costs, but they don’t offer the same protections as conventional payment systems, like your bank account.

The Fed has been studying the risks and benefits of CBDCs for several years now and will issue a discussion paper summarizing its findings this summer.


* Fractional reserve banking is a system in which only a fraction of bank deposits are backed by actual cash on hand and available for withdrawal.

Investment Strategy Quarterly is intended to communicate current economic and capital market information along with the informed perspectives of our investment professionals. You may contact your financial advisor to discuss the content of this publication in the context of your own unique circumstances. Published 7/1/2021.