The Federal Reserve’s (Fed) legislated dual mandate is price stability and maximum sustainable employment. It defines price stability as 2% inflation as measured by the Core Personal Consumption Expenditures (PCE) Price Index. In August 2020, the Fed formally revised its monetary policy framework to an average inflation-targeting system. Following a period below the 2% long-term target (as has been the case for the last several years), the Fed will pursue a period of inflation moderately above 2%, while leaving the longer-term goal intact.

This policy change is a significant departure from past decades, where the Fed would act preemptively to prevent inflation from rising. The view had been that if inflation were allowed to pick up, inflation expectations would also rise, reinforcing higher inflation, which would add to inflation expectations, and so on. This was the primary explanation for the high inflation of the 1970s and early 1980s. The change reinforces the notion that 2% is a goal, rather than a ceiling on inflation.

Why does the Fed say there’s no inflation when the price of everything I buy is going up?

Fed officials are not disputing the fact that inflation has picked up, but it is important to remember that your personal rate of inflation may differ from what the Fed targets when setting monetary policy.

The Fed is concerned about sustained increases or decreases in the overall level of prices in the economy. It is not focused on the price of a single good or service. Consumers tend to notice price increases right away, particularly for food and gasoline prices, but they don’t often see places where inflation is low or negative (bought a largescreen TV lately?). Prices of most goods and services are raised periodically – so you see the increase all at once rather than over time. The media can also play a big part in fanning inflation fears.

While consumer price inflation is now above the 2% target on a year-over-year basis (5.0% for the 12 months ending in May 2021), the Fed believes that the increase is due to transitory factors, one of which is called base effects – inflation was low during last year’s lockdowns (the CPI rose just 0.1% for the 12 months ending May 2020) and prices are rebounding as the economy returns to normal. Another transitory factor is restart pressures, such as supply chain disruptions and materials shortages. Restart pressures occur in every economic recovery, but are more intense now due to the speed of the economic recovery. Fiscal policy has been larger than was anticipated at the start of the year and vaccinations have arrived quicker. The surge in economic growth caught some producers flat-footed. February’s severe weather delayed supplier deliveries and the pandemic has had a continued impact on foreign trade, made worse by container shortages and higher shipping costs.

How long is “transitory”?

There is no precise time period, but most inflation pressures should not be permanent. Base effects will continue for a few months, fading by late summer. Supply chain bottlenecks and input shortages may not be resolved as quickly and could put upward pressure on inflation beyond this year, but they will clear up eventually.

Labor market frictions will be more intense than in a typical economic recovery. Matching millions of unemployed workers to available jobs will be challenging. Schools and daycare facilities will reopen in the fall, which should lead to an increase in labor force participation; however, many older workers opted for early retirement during the pandemic and may be reluctant to reenter the labor force.

Fiscal policy will remain supportive into 2021, but less so, becoming a drag on economic growth (offset partly by a recovery in private-sector demand). The increase in household savings, built up during the pandemic, should support consumer spending growth in the near term, but will be depleted over time. Economic growth is expected to moderate into next year, helping to reduce inflation pressures.

Why are some economists (including former Treasury Secretary Larry Summers) more concerned about inflation than others?

Some economists, including former Treasury Secretary Larry Summers, are concerned that the unprecedented amount of fiscal stimulus will boost aggregate demand enough so that it continues to outpace supply. Under this scenario, inflation pressures won’t recede, leading to a sustained increase in inflation expectations (and higher actual inflation). Biden administration economists (and others) disagree – believing that supply chain issues will be resolved and inflation expectations will remain well-anchored.

Why does the Fed exclude food and energy? Don’t you and I have to buy gasoline and groceries? 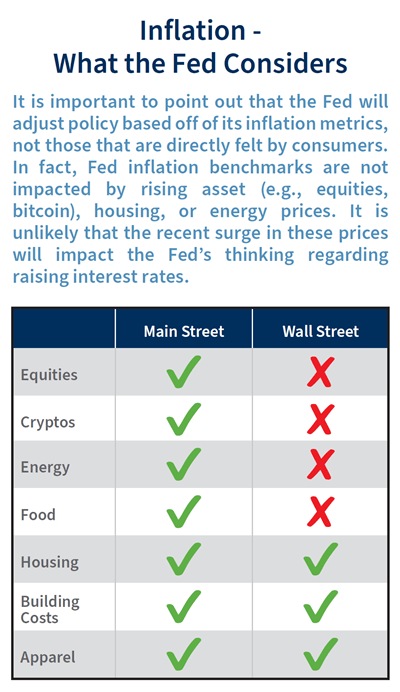 Money supply measures have surged during the pandemic. Won’t this lead to higher inflation?

Economists are taught that inflation is “always and everywhere a monetary phenomenon” – too much money chasing too few goods and services – but the various monetary aggregates are not a useful gauge for inflation.

M2, which is the most liquid form of money (currency, savings and checking accounts, small time deposits, and retail money market funds), rose sharply in the early part of the pandemic and has continued to move higher. Households have increased their savings and banks have been accumulating reserves (which the Fed now pays interest on). Through its large-scale asset purchases (quantitative easing, or QE), the Fed has pumped reserves into the banking system, but that’s only inflationary if consumers borrow excess reserves from the banks and spend. That’s not what’s happening. The rise in M2 has more to do with the pandemic (increased demand for liquid assets) than with Fed policy (which has acted to meet the demand for liquid assets).

What if the Fed is wrong and inflation does rise on a sustained basis?

If higher inflation is sustained, the Fed can always tighten policy through a reduction in the monthly pace of asset purchases or by raising short-term interest rates sooner than expected. Under this scenario, economic growth would slow, perhaps more than intended. Soft landings are difficult.

In a recent speech, Fed Governor Lael Brainard said “a persistent material increase in inflation would require not just that wages or prices increase for a period after reopening, but also a broad expectation that they will continue to increase at a persistently higher pace.” The Fed will be closely monitoring the incoming data, “attentive to the risk that what seem like transitory inflationary pressures could prove persistent.” However, Brainard stressed that “should this risk manifest, we have the tools and the experience to gently guide inflation back to our target – no one should doubt our commitment to do so.”


Investment Strategy Quarterly is intended to communicate current economic and capital market information along with the informed perspectives of our investment professionals. You may contact your financial advisor to discuss the content of this publication in the context of your own unique circumstances. Published 7/1/2021.